Ralph is back – finally! 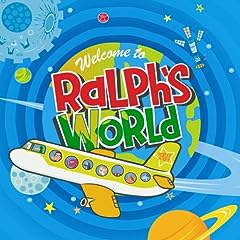 For almost a year, since Ralph’s World signed on with Disney, his recordings have been a seriously endangered species. For reasons I still don’t completely understand, Disney didn’t rerelease his existing CDs, and his previous label stopped producing them. So we haven’t been able to perpetuate our Ralph addiction for quite some time. Now, Disney has just released a really nice 2-disc set with a CD and a DVD. The CD offers a selection of greatest hits and one new song, “With a Friend (Pooh Song).” The DVD has a selection of animated concert videos, which intersperse Ralph with animation and shots of kids dancing along. I’m a little disappointed that they didn’t include any of the clever animated videos based on the artwork of Giselle Potter, who did the album art for all the prior Ralph’s World CDs. They used to be up on the Ralph’s World website and my kids were addicted to them. It looks like Disney is making an effort to rebrand Ralph’s World with a vibe that’s less indy and more mainstream. Whatever brings this great music to the masses is AOK with me, and if you’re not yet acquainted with Ralph, this is a great introduction.

I noticed that Amazon.com is offering a version of this album with an exclusive audio track and an exclusive video track. We have the regular album in the store, but if you’re a die hard fan, you may want the Amazon edition.

Read a full review at zooglobble.com.

The post Ralph is back – finally! appeared first on Spilling the Beans - Magic Beans.